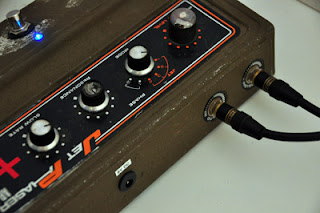 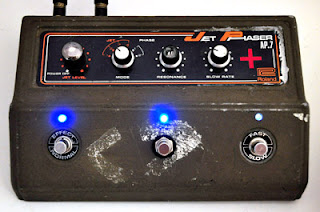 This has been an on going project which I think finally came to an end. It was a distortion/phase pedal but you couldn’t select the effects separately. I added the center switch to control the phaser separate from the distortion. I converted each effect to true bypass and added LEDs. The far right footswitch ramps up or down the rate of the phaser. It’s a great idea but difficult to follow when using live. I installed a white LED that pulses the rate of the phaser for a visual indication. This pedal runs off of two 9V batteries for a +/- setup and had no AC adapter jack. I installed a negative voltage circuit so it can run off of a single battery and then installed a standard 2.1mm barrel jack to be used with any standard power supply. It was a large investment of time but the modifications make it practical for live use.

This entry was posted in Favorites, Modifications and tagged Roland Jet Phaser AP-7. Bookmark the permalink.