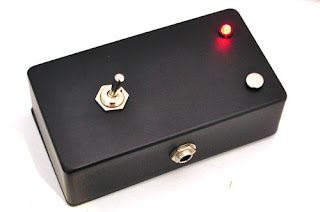 The cease.transmission was originally developed to be a quirky noise maker for studio and DJ use. Eventually guitar players started snatching them up but quickly found that since the original model doesn’t have an input jack that it is difficult to add to their pedalboards. This prototype was designed to fix that problem. The input and output jacks are setup in the same location as most standard guitar effects. They are wired in parallel yet will not load down your guitar signal. The LED is on when the effect is switched on and pulses with the lower frequencies generated. The toggle switch was chosen over a stompswitch because the device requires your hands to “play” the touchpad. The unit is still battery only, but draws no power when off and about 11mA when on (about the same as a Boss Chorus Pedal). As of this posting, the one pictured is available for $90 on the specials page. More may be available in the near future and may lead to a deluxe model.

This entry was posted in Prototype and tagged Cease.transmission. Bookmark the permalink.